After slaving in the kitchen all day Susie, AKA the French Tarte, needed a break from the heat and admittedly pleasant pressures of baking --  naturally, in a city known for its food we went out to eat.

A favorite spot to grab an early evening cocktail or glass of wine is Tini's at 200 Washington Street, right across from Trinity Rep, one of the city's most popular theaters. This night, however, we decided to stay and enjoy Darius' latest menu offerings. And we were not disappointed -- no sirree!

So many people in this corner of the planet are familiar with Atwell's Avenue -- yet for us the "Federal Hill" cachet is more smoke and mirrors than anything else. Overpriced mediocrity is how we tend to describe  much if not most of the food on Atwell's. The real culinary gems, the places where you will find consistently outstanding cuisine are scattered around other corners of the city: Nick's on Broadway, Broadway Bistro, Ama's, Chez Pascal, New Rivers, Bacaro's and Cook and Brown to name our favorites.

Anyway, back at Tini's we settled on a pair of stools near the back wall (Hickock Syndrome) and kicked off with a brace of Rosy Cheeks cocktails - vodka, Campari and grapefruit jouce; and boy were these good! 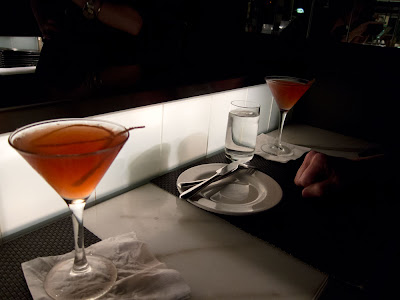 For starters we ordered the "Spicy Broccoli" with chili peppers. Yes, it was a bit piccante but delicious -- roasted to perfection with just the right bite to it. 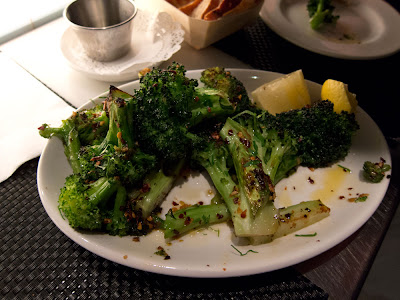 We both had pasta; I had Darius' homemade gnocchi -- with sourdough flour instead of potato -- in a rabbit ragu, kalamata olives and chiles. 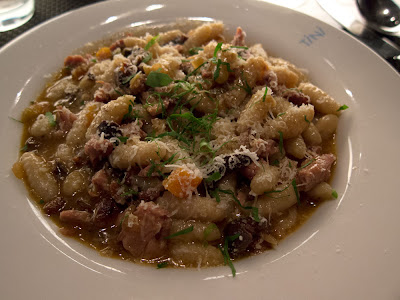 Susie had the short ribs ravioli with mushrooms and gorgonzola. 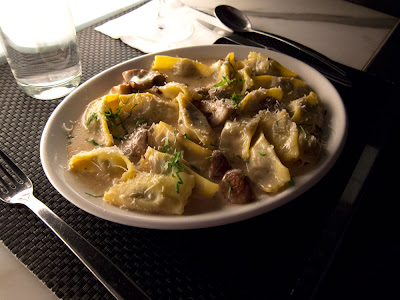 Both pastas were washed down with a glass of Nebbiolo.

Like the other restaurants noted above, Tini's defines the new wave Providence food scene: quality, creativity, and value all wrapped up in just the portion.

New Rivers it is for New Year's Eve

It was a hard choice for New Year's Eve -- Nemo at Cook and Brown, Matt Gennuso at Chez Pascal or Bruce and Beau at New Rivers.

We opted for New Rivers: Five courses for 65 bucks and we requested the cozy room -- hint, hint. OK the new space has lots of glass and a wonderful view (at night) of the church steeple (they are on Steeple Street, after all). But it's just not, you know, cozy, bistro-like.

The idea is to support the handing off of the baton, the transition of administrations, and we want to help make that change as smooth as possible, to do our part. To say good-bye to Bruce and hello (again) to Beau and his crew.

Stay tuned -- we'll have a full report plus photos on January 1 (or 1 January for the Europeans).
Posted by Steve Soper at 6:09 PM No comments:

Well, they've done it again. Mike Sears and Allan, his main (and only) man in the kitchen have gone and produced yet another scrumptious, mouth-watering meal at Ama's. That's right, the man who recently moved a diner from the backside of Loie Fuller's parking lot two blocks down Westminster street and plopped it down on a brand-new foundation without so much as batting an eye. That Mike Sears.

In case you still haven't gotten over to Ama's you are missing out not only on some wonderfully delicious and imaginatively creative cuisine, but at a damn good value. And a wine list to match.

Susie and Andie had the bento boxes (15 bucks each) and the three of us split two orders of the green beans for apps -- and a bottle of French sparkling wine.

Thats living West side style.
Posted by Steve Soper at 2:52 PM No comments:

New Rivers is doing a semi-special for New Year's Eve

I just heard from Bruce Tillinghast at New Rivers on Steeple Street in Providence. They will be offering a special five-course meal from a limited menu for $65 -- NOT including drinks, tips, tax. That's not bad. . . not bad at all!
Posted by Steve Soper at 6:11 PM No comments:

Where to go for New Year's Eve Dinner in Providence?

Well, we've started the process of looking for a place to have dinner this NYE -- no, not the eat-until-midnight-and-then-break-out-the-party-favors sort of affair. Just a nice sit down dinner, special menu, maybe wine pairings to relax and usher out one part of our life while we make room for the next part.

So far we've ruled out La Laiterie/The Farmstead in Wayland Square. Their special menu appeared to focus on a beer theme, among other things that didn't really appeal to us.

Gracie's is doing the special midnight thing -- as they usually do, with theme and all. Sounds like fun but, again, not our style.

Tini's is going to be closed this year, I'm told.

Chez Pascal and Cook and Brown are two strong possibilities; they both claim to be working on a special menu -- but we're waiting to hear what the details are and cost. I'm also waiting to hear whether New Rivers is doing anything special at all.

Bacaro's in Providence - An A+ meal

Last Saturday Susie and I headed over to Tini's downtown Providence for an aperitif before slipping across the river to Bacaro's for dinner.

A truly unique food bar Tini's is always a pleasant, cozy (emphasize cozy) place to hang out, chat and sip a cool glass of sparkling wine or try one of their latest cocktail creation (for us it was something called Must Lust that included prosecco, gin and fresh squeezed grapefruit joice).

Anyway, we did notice the big menu change: they are now offering larger portions, the traditional "main course" items featured on your typical menu. Since Darius is still the kitchen guru there shouldn't be any concern about loss of quality that's for sure. But American's seemed obsessed with big: big houses, big cars, big rooms, big portions.

From Tini's we scooted back to the car and drove five minutes through downtown and over the Crawford Street Bridge, up and around to Bacaro's on Water Street. We were right on time for our reservation and  seated straightaway. Service was just about right, although we'd both like to see more American restaurants be less attentive. I don't need someone coming by two or three times to ask if I need anything or if everything is OK. Usually they catch me with food in my mouth. Even so, if something isn't OK wouldn't I flag someone down and let them know?

Anyway, the food was superb -- in fact the starter of crispy octopus on a bed of creamy white beans with Swiss chard and all drizzled with honey was eeeeencredible. Following that up, Susie had crispy chicken with pappardelle and I had a scrumptious filet with tiny bliss potatoes and a salad. Large portions, particularly the pasta dish. (See Tini's above.) We each shared a 1/4 liter of white with the app and 1/4 liter of red wine with the main course. 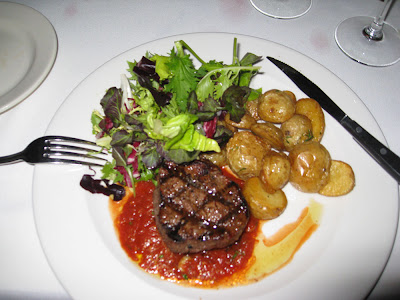 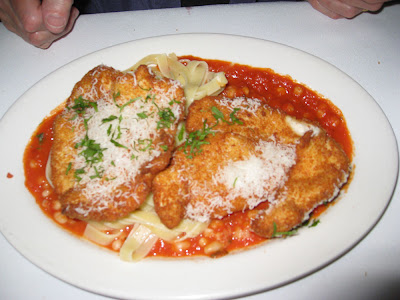 Newer Posts Older Posts Home
Subscribe to: Posts (Atom)
My wife is a pastry chef. How cool is that, eh?